Recently Mary and I ventured south on a Sunday morning to Tremont, Illinois, the town where I grew up. 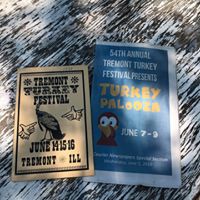 It was the 54th annual Tremont Turkey Festival, with carnival rides, craft tents, car show, the longtime staple of turkey legs, turkey sandwiches and trimmings and, on that Sunday morning, the Community Worship Service where I had been asked to be the speaker. I was honored to do so.

Shawn Dagenhart, President of GospelFest Ministries, led us in a meaningful time of worship. Shawn is a gifted music publisher, writer, arranger, orchestrator, well known in that area, and he drew a crowd. Following the service, Mary and I visited with some family members and a few of my High School classmates. One friend reminded me of the time we were supposed to be working on a school project but ended up playing with my ham radio instead. A woman recalled that I had baptized her 42 years ago. Lucille, a member of the church I served in Delavan, Illinois, is now 98 years old and told us she is still volunteering at a nearby hospital.

I missed my cousin, Terry. He died unexpectedly last October and surely would have been there. Terry’s brother and sister-in-law and I visited briefly, feeling sad about Terry’s absence. More than 50 years ago, Terry and I walked those carnival grounds as workers set up the rides. One of the workers asked us if we would find them some striped paint. Another asked if we would please get them a left-handed monkey wrench. We were young and naive but not that dumb. But it was a memory on those grounds where I had now come to invite people to inhale God’s grace.

From the worship tent, we made our way, with my sister, my mother and a couple great-nephews, to the large park shelter where the famous, and delicious, turkey meat was being served. And we wisely chose not to resist another Turkey Festival tradition, strawberry shortcake. 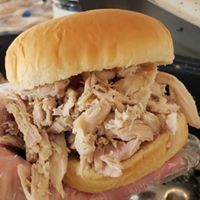 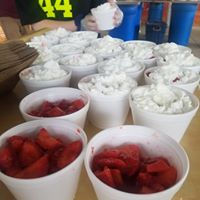 It was in Tremont that my parents went to High School, dated, fell in love and got married in nearby Pekin at a pastor’s home. At the Tremont Baptist Church, I was nurtured and made an early profession of faith in Jesus Christ, and it was there I preached my first sermon. My dad was a respected businessman in Tremont for many years in that small town whose population, for as long as I can remember, hovered around 2000. He was trusted for his good work and for always treating people fairly. I’ve admired his courageous decision to leave the steady income of Caterpillar, after carrying a lunch bucket for only six weeks, saying he just didn’t want to do that for the long haul. He stepped into what eventually became his own business where he sold gas and repaired and sold cars. Through his hard work and good reputation, he provided comfortably for our family. His dad, my grandpa, had been the oldest continued Shell dealer out of the Chicago area, on the same location.

These are my roots. It was good to be in touch with them again. In many ways that day, we inhaled grace and exhaled gratitude.

Having risen early that morning, Mary and I were tired as we arrived home later that afternoon with my 95-year-old mother, who would be staying with us for a couple weeks. She sighed as we put her to bed. As I pulled the covers up on her I said to her, “you’ve had a big day.”

3 thoughts on “Visiting My Roots”

This site uses Akismet to reduce spam. Learn how your comment data is processed.

I hope you will find here glimpses of grace that lead you to be grateful. There is no greater impact on our lives than the grace of God. As grace touches us, and we inhale it, let it soak in, breathe it, it will lead us to gratitude. And few things affect us more and make us truly new persons, than being thankful. It changes the horizon of our lives, how we see things. It greatly reduces griping. It transforms how we deal with things that don't go as we hoped they would. It enriches our relationships with others. Being aware of, and overwhelmed with, God's goodness is a wonderful way to live.

Who am I? I am a Christ-follower, husband, father, grandfather, great-grandfather, writer, preacher, ordained American Baptist Pastor, retired.